Sophie Turner has described her Game Of Thrones character in three words that will leave fans in no doubt that Sansa Stark will have much bigger, badder role to play in Season 6. 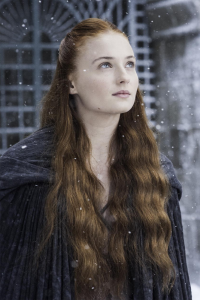 Sansa was last seen in the Season Five finale, having survived after leaping from Winterfell’s castle wall.

Turner recently told Entertainment Weekly that she has noticed a change in fans’ perception of her character.

In a recent interview with The Sunday Times, the 20-year-old said: “In Season Six, Sansa takes command. It’s her season… And lots of other characters’, of course.”

As previously reported on AAA Edinburgh, HBO recently clarified that Jon Snow is definitely dead in the first episode of the show’s sixth season.

Whether or not he stays dead remains to be seen.

The hit fantasy drama returns on April 24, with Sky Atlantic screening the episodes in the UK.

Ahead of the new season premiere, HBO made a brief synopsis available for the first episode.

The episode is titled The Red Woman and fans of the series have speculated that the “strong man” Emilia Clarke’s Daenerys meets could well be Strong Belwasv – a much-loved character from George R.R. Martin’s novels, who has yet to appear on screen.

The Red Woman is penned by showrunners David Benioff and D. B. Weisd, who recently promised that season six will be “the best yet” and contains the “biggest battle scene to date”.