Here’s the thing: Star Wars is a bit like a bad relationship. We fell in love with the original trilogy (if we’re old enough), then Jar Jar Binks came along in full-on gloopy CGI and made us want to forget.

Not to ignore the fact there were inspired moments of cinema in there, but mostly we remember the prequels for all the wrong reasons. Right?

Ok, so perhaps that’s a tad unfair. After all, George Lucas is still the architect of a brilliant universe that happens to be populated by some not-too-great movies.

Without him, though, we wouldn’t have had the awesome highs, too. The original movies, the pod car racing, Qui-Gon Jinn, the Darth Maul v Obi-Wan fight scene, Jango Fett fighting… well, anyone?

So now it’s back, coaxing us to a galaxy far, far away – cooing at us ‘I’ve changed, I’ve really changed!’.

Maybe it’s the Mos Eisley beer goggles but, in this reviewer’s opinion, the franchise is looking quite good again. Who knows, we might even start dating again… you know, just to see where it leads?

From the opening scroll, John Williams’ iconic fanfare draws you in… and I realise something. I must be middle-aged, because I’m sitting there and it dawns on me… Williams IS the Force.

Stay with me here. He’s there all the way through, making you feel the full gambit of emotions. That opening scroll – take away the music and it’s just a really long text in space. beer goggles, but the

Don’t get me wrong, this is a very good movie. The first third is both original and dynamic, and the storytelling is of the highest calibre. By the time the second or third act come along, there is definitely a sense of deja vu, but it doesn’t seem to ruin the experience.

There are things I wish I could change – but in every relationship there is good and there is bad. It’s about compromise, right?

I’m willing to forgive the CGI rearing its head in fits and starts, because there is such artistry and craft in everything else you witness on screen.

Lord Snoke  – Andy Serkis’ motion capture character – is a bit odd and slightly unreal, as are two giant monsters in one scene. But hey, sometimes we all leave the toilet seat up.

Perhaps my rosy disposition is down to a very interesting new group of characters from both camps – good and bad.

BB-8 is an amazing creation, whom I fully expected to hate more than Jar Jar Binks (AKA Roger Rabbit). Who knew you could grow to love a beach ball like that favourite puppy?

Daisy Ridley is very credible – and very watchable – as Rey. John Boyega is energetic and plays Finn, the ‘fish out of water’, with great comic timing, but he’s also sincere and believable.

Oscar Isaac’s Poe Dameron is more of a classic hero, but likeable, and the friendship he strikes up with Finn has a touch of authenticity.

Captain Phasma does not have much to do, but is sure to be a cult classic – remember, Boba Fett only had a couple of ‘nothing’ lines and was very much a background character. Maybe he owed much of his cult status to the fact he’s one of the few characters who gave Darth Vader backchat: ‘He’s no use to me dead!’. Too cool.

The standout from the new upstarts, however, has to be Adam Driver. The Girls star has big shoes to fill – and he does so brilliantly. This is how you play a tortured soul, stuck between two sides… someone take him back in time and give him the role of Anakin, please.

Of the old guard, Harrison Ford as Han Solo has, of course, responsibility for taking the loose ends of the narrative and bringing them together – more wise-cracks than wiser, but he’s still got it.

Carrie Fisher’s Leia does a good job of playing it straight with some touching scenes, whereas Mark Hamill’s Luke is a bit more tricky to explain.

The old background furniture is back (and I mean that affectionately). The walking carpet himself, Chewbacca, still looks capable in a dog fight and he gets the lion’s share of screen-time and emotion among the old familiar faces.

C-3P0 and R2-D2… what can I say? The most interesting thing about C-3p0 is the new red arm. Do we care to hear what happened? The Millennium Falcon would appear to have a more interesting backstory here.

You may feel as though the ending is a bit like a band doing a cover of your favourite song – and I wouldn’t blame you. But this film does tick a lot of boxes and JJ Abrams has made a very difficult task look easy. Well done John Williams for making it sound easy, too. 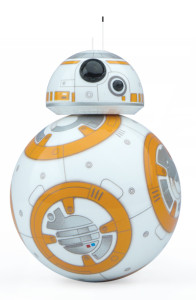 Second date here we come.. albeit in two years’ time.