Comic book fans got a first full look at Jared Leto’s Joker from next year’s much-anticipated Suicide Squad movie after Empire magazine revealed what he looks like.

The actor/singer graces the cover of the new issue of Empire, which hits newsstands on October 29.

Heath Ledger’s universally-praised portrayal of the Joker in 2008’s The Dark Knight was always going to be a hard act to follow – and Leto admitted that he had difficulty playing the comic book villain for Suicide Squad in an interview with Empire. 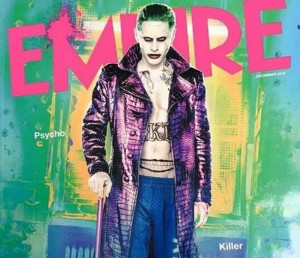 “There was definitely a period of… detachment,” the Oscar-winning actor and 30 Seconds To Mars frontman said. “I took a pretty deep dive. But this was a unique opportunity and I couldn’t imagine doing it another way. It was fun, playing those psychological games.”

Asked just how painful the process was, Dallas Buyers Club star Leto gave an answer that’s since made headlines around the world. “It was fun, playing those psychological games,” he said. “But at the same time it was very painful, like giving birth out of my prick hole.”

Even though critics universally agreed that he absolutely nailed it, Ledger also “feared” playing the Joker in the Dark Knight.

In an interview shortly before his death, the late actor said, “I sat around in a hotel room in London for about a month, locked myself away, formed a little diary and experimented with voices – it was important to try to find a somewhat iconic voice and laugh.”

Leto, whose film credits include The Thin Red Line, Fight Club, American Psycho and Requiem For A Dream, stars opposite Margot Robbie, Will Smith and Jai Courtney as a crew of rejected supervillains in Suicide Squad, which hits Edinburgh cinemas in 2016.

“There’s a power to that character,” Suicide Squad director David Ayer said, “and by some freaking miracle, through the incredible things Jared has done and the photography and all the other millions of things that went into it, we’ve cooked up something transcendent. He’s scary.”

While some comic book fans said Leto’s Joker was “so beautiful” and “utter perfection”, others couldn’t see past the character’s “ridiculous” outfit – a purple snakeskin coat, joggers, a walking stick and tattoos aplenty.

Meanwhile, Leto has promised that a “big announcement” is due later this week from 30 Seconds of Mars, who played Edinburgh’s Corn Exchange in 2008.