This weekend, Bay City Rollers will turn T in the Park tartan when they perform together for the first time since their Christmas reunion gigs. The band will take to the stage of the King Tut’s Wah Wah Tent at the music festival on Saturday.

Ahead of their performance, AAA caught up with Les McKeown, Alan Longmuir and Stuart John Wood to find out how it felt when they were invited to perform at the festival, what fans can expect from their new album and their plans to tour internationally next year.

Stuart: It’s been a while since I last played a festival and this will be the first one in Scotland. The atmosphere I’m hoping will be brilliant – cannae wait!

Alan: The atmosphere’s going to be amazing – I’m looking forward to the crowd reaction!

Les: The atmosphere will be super-special and I’m most looking forward to performing our hits. 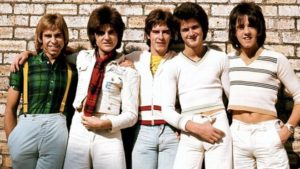 Stuart:  I’m personally very honoured to have been asked and thrilled to bits that we’re taking part in Scotland’s biggest music festival.

Alan: I can’t believe we’re playing at one of UK’s coolest festivals after all these years. It’s going to be really special!

Les: We are thrilled at being invited to perform at this exceptional event – happy days!

Stuart: The Bay City Rollers haven’t played since the sell-out shows at Christmas last year but I’m excited to be playing the classic songs once again. We have a great production team, so between them and a few added Bay City Rollers tracks, it should be fun.

Les: We have refined our show to produce the best sound and visuals we can give and we are sure that the audience will enjoy it.

Stuart:  The original band split back in 1982, though we did a few reunion gigs over the years. It is quite amazing that we are getting another kick at the ball…it just goes to show that good songs never die and hopefully a new Bay City Roller album at the end of the year can add to that?!

Alan: I’m just loving every minute of it.  It’s taken us back to when we were at the height of our career and it’s incredible! Everyone’s been so supportive of the reunion which is so humbling.

Les:  It feels great to be in this situation – lots of great things are happening and we are taking our time to make it work for us.

“It just goes to

Stuart:  We’ve put a couple of tracks in the set that I haven’t played live before so it will be interesting to see how they go down!

Alan: We’ve got a great show lined up and a couple of rare treats for the hard-core Bay City Rollers fans!

Les: We will be performing all the big hits and a few rare songs!

Stuart:  We’re spoilt for choice! I’m not sure how the day will work out but I’m hoping to catch one or two of the other acts.

Alan: The grandkids would kill me if I didn’t see Calvin Harris -maybe I’ll get a selfie! Haha!

Les: We want to see as many other bands as possible.

Stuart: We’ve got some ideas kicking about for new ventures and we’re also back in the studio to carry on working on tracks for the new Bay City Rollers album, which we’re hoping to release end of this year.

John McLaughlin has an abundance of ideas and the energy to see them through so time shall tell where we are by this time next year. It’s all very exciting!

Alan:  I’m just back from Canada with my I Ran with the Gang show that’s coming to the Fringe in Edinburgh in August.

Les: I’ll be on tour during September until the end of November 2016 and I’m releasing a new album on August 22.  The Bay City Rollers reunion project will reunite in December for some special shows, which will be announced soon!

Alan: We’ve got a few things in the pipeline so watch this space!

Les: A tour of Japan is scheduled for February 2017 and hopefully in the USA in the summer of 2017.

Bay City Rollers perform in the King Tut’s Wah Wah Tent at T in the Park on Saturday. For tickets or more information, visit http://www.tinthepark.com/