With only days to go until T in the Park 2016 kicks off, AAA: Edinburgh will be chatting to some of the most exciting acts from all the stages to bring you latest news from Scotland’s largest music festival.

We caught up with Leon Green, lead guitarist of indie-pop band The Lapelles, ahead of their slot on the T Break Stage on Sunday.

It’s the festival that everyone in Scotland goes to as a rite of passage and lots of our friends will be attending – both playing and camping.

It’s also the first major festival that we will be playing so we can’t wait!

T in the Park will be a great chance to get our music out there so our set list will consist of what we feel are our best songs. I think with it being a bigger stage, but also an inside tent, will make us feel comfortable, but we’ll be putting on an energetic show for sure. 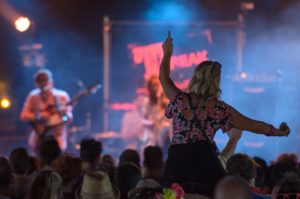 The night before T in the Park we’re in London playing a show with Blossoms and then we’re straight on the road to get to T!

We’re only there on the Sunday so Blossoms, Declan Welsh, LCD Soundsystem, Slaves, FIDLAR and Sweaty Palms!

We all attended Reading Festival in 2015 with loads of our friends, which turned out to be destructive and amazing.

It was a good experience playing with people that we can call ourselves fans of, and was also great playing with bands of that calibre.

It’s interesting to see how shows are done on that scale and all the little things that are involved – it’s definitely something that has had a lasting effect!

We learnt how to compose ourselves in front of a larger audience who didn’t necessarily know our music. It was a baptism of fire in some regard, but I think we all felt confident and happy with how it went.

We headline King Tut’s in Glasgow on the Saturday 16 July and then it’s some recording time and then we’re off on some dates in October, hopefully around our next release!

The Lapelles play the T Break Stage at T in the Park on Sunday. For tickets or more information, visit http://www.tinthepark.com/