Twelfth Night
In Shakespeare’s bittersweet comedy genders blur, boundaries are crossed and the world is turned upside down, all with music as the engine for these bacchanalian shenanigans. Director Wils Wilson saturates this tale of magic and wonder with all the psychedelia and bohemian delight of the ‘summer of love’.
Desire and grief collide in a heady cocktail as hidden emotions are aroused in a quartet of lovers. Meanwhile frivolity is edged with cruelty as the puritanical Malvolio, transformed for a time into a Technicolor alter-ego, is humiliated and abandoned; a man marooned, left behind by a generation he will never understand.
So join Viola (or is that her twin brother Sebastian?), Orsino, Olivia, Toby Belch and his sidekick Andrew Aguecheek, and the rest of the household for Shakespeare’s most sparkling cocktail of wit and deep feeling. It’s sure to be the party of the year!
Lyceum Associate Artist Wils Wilson’s vibrant production, performed by actor-musicians, will include a score by Welsh Music Prize winner, Meilyr Jones, whose bold and beautiful compositions intertwine early music with contemporary tones. Co-produced with Bristol Old Vic
Royal Lyceum Theatre, Grindlay Street, Tuesday 18 September to Sunday, 6 October, £16-£32 (£10; matinee £14-£28.50), 0131 248 4848 Benidorm Live
Starring Jake Canuso (Mateo), Janine Duvitski (Jacqueline), Adam Gillen (Liam), Sherrie Hewson (Joyce Temple-Savage), Shelley Longworth (Sam) and Tony Maudsley (Kenneth), the official world premiere of Derren Litten’s smash-hit ITV comedy Benidorm is set to bring sunshine and smiles to the UK and Ireland in the stage debut production of the hugely popular TV show.
ITV’s award-winning comedy celebrates a decade of all-inclusive hilarity, having followed the ensemble cast of holiday makers and staff for nine series since it first broadcast in 2007, with series ten due early next year. Litten has now written an all new set of Alicante escapades for the much-loved cast members as they swap sangria for the stage – after a quick spruce up at the Blow ‘n’ Go!
Edinburgh Playhouse, Greenside Place, Monday 17 September to Saturday 22 September, 7.30pm, £16-£55.50, 0844 871 3014

Islands In the Stream
The ultimate tribute to country legends Dolly Parton and Kenny Rogers. Leave your 9 to 5 worries behind and get ready for a night in the company of country music royalty!
This thigh-slapping show brings together the beloved glamour and personality of Dolly, along with Kenny’s charisma and energy with hit after hit including Jolene, Ruby, 9 to 5, Lucille, Here You Come Again, The Gambler, I Will Always Love You, and Coward of the County, plus the smash-hit Islands in the Stream.
Edinburgh Playhouse, Greenside Place, Sunday 23 September, 7.30pm, £24.65-£54.65, 0844 871 3014

Richard Alston Dance Company
Richard Alston choreographed his very first dance in 1968 – 50 years later Mid Century Modern celebrates this landmark with new and old work from Alston, a fitting celebration of a half century of making dances. The programme also includes Carnaval by Alston performed to Schumann’s music of the same name. Evocative piano pieces describe the different aspects of Schumann’s split personality.
The music is played live by outstanding pianist Jason Ridgway and the costumes are by BAFTA Award winning designer Fotini Dimou who previously worked on Alston’s An Italian in Madrid and Illuminations.
The third piece in this programme will be the very latest creation from Associate Choreographer Martin Lawrance, who’s recent Tangent received such brilliant reviews.
Festival Theatre, Nicholson Street, Thursday 20 September to Friday, 21 September, 7.30pm, £17.50-£23.50, 0131 529 6000 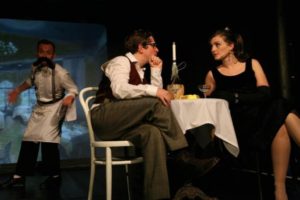 A Play, A Pie and A Pint: Tap Dancing with Jean-Paul Sartre
Paris, Spring 1956, where Fred Astaire, the world’s greatest dancer, Jean-Paul Sartre, the world’s most influential philosopher and Audrey Hepburn, the world’s most beautiful woman, meet in a musical comedy about existentialism, the meaning of life and tap dancing your way to happiness…it don’t mean a thing if it ain’t got that swing!
Produced in association with the Traverse and Aberdeen Performing Arts James Runcie is the author of The Grantchester Mysteries (televised as “Grantchester” with James Norton and Robson Green), a Fellow of the Royal Society of Literature, Visiting Professor at Bath Spa University, and the Commissioning Editor for Arts at BBC Radio 4.
Traverse Theatre, Cambridge Street, Tuesday 18 September to Saturday 22 September, 1pm, £13.50, 0131-228 1404