Dan and Phil World Tour: Interactive Introverts
Dan and Phil present their new stage show – Interactive Introverts. Two internet dwelling, insecure nerds standing under the spotlight to give the people what they want: an epic interactive experience of rants, roasts, battles, stories ..and surprises that will make you laugh, cry, cringe and puts the audience in control unlike anything before!
Usher Hall, Lothian Road, Saturday 12 May, 2pm; 8pm, £16.50–£108.90, 0131-228 1155

Anatomy: Finest Cuts
Full-throttle live art cabaret: an unpredictable cauldron of mischievous performance, featuring everything from tactical action to bleak bouffon, from noise art to fart jokes, from opera to pop and ballet to biscuits.
Traverse Theatre, Cambridge Street, Thursday 10 May to Friday 11 May, 8pm, £9–£17 / 0131 228 1404 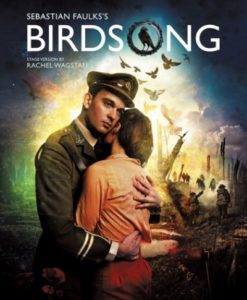 Birdsong
Marking the 100th anniversary of the end of World War One, Birdsong is the critically acclaimed stage show based on Sebastian Faulks’s best-selling novel. In pre-war France, Englishman Stephen Wraysford embarks on a dangerous affair with the beautiful Isabelle Azaire turning their worlds upside down. As war breaks out over the idyll of his former life, Stephen must lead his men through the carnage of the Battle of the Somme and the sprawling tunnels that lie deep underground. A mesmerising story of love and courage set both before and during the Great War.
King’s Theatre, Leven Street, Tuesday 8 May to Saturday 12 May, various times, £18–£31.50, 0131-529 6000

Grumpy Old Women to the Rescue
Fed up with flogging their guts out and always having to be in charge, the Grumpy Old Women have put their knobbly old feet up in glorious retirement, free at last to practise their extreme colouring-in, ukelele orchestra and novelty fudge- making.
But with the world in a bigger mess than ever before, is there anything that can tempt them off their backsides to unleash their superpowers and once more come to the rescue?
King’s Theatre, Leven Street, Sunday 13 May, £29.50, 0131-529 6000

Wicked
Based on the acclaimed, best-selling novel by Gregory Maguire that ingeniously re-imagines the stories and characters created by L. Frank Baum in The Wonderful Wizard of Oz, Wicked tells the incredible untold story of an unlikely but profound friendship between two sorcery students. Their extraordinary adventures in Oz will ultimately see them fulfil their destinies as Glinda The Good and the Wicked Witch of the West.
The Edinburgh Playhouse, Greenside Place, Tuesday 8 May to Saturday 12 May, various times, £22.50–£92.50, 0844 871 3014

Creditors
August Strindberg’s masterpiece is a gripping exploration of a love triangle, which ricochets from biting comedy one minute to devastating tragedy the next. You are never quite sure what will happen next. Stewart Laing of Untitled Projects brings his stunning visual style to David Greig’s adaptation.
Royal Lyceum Theatre, Grindlay Street, Friday 27 April to Saturday 12 May, various times, £14-£32 (£10), 0131-248 4848

Gut
World premiere Traverse Theatre Company in association with National Theatre of Scotland
I know my boy. I’d know if something had happened to him.
Maddy and Rory are devoted parents to 3-year-old Joshua, committed to keeping him happy and safe. But when an everyday visit to a supermarket café turns into a far more troubling incident, their trust even in those closest to them is shattered. Fear and doubt consume them, until they reach a savage breaking point.
Traverse Theatre, Cambridge Street, Tuesday 1 May to Saturday 12 May, 7.30pm, £11–£22, 0131-228

Lorde has just announced a massive world tour – and it includes