ANIMALS
ANIMALS is a show about… animals. Big ones, little ones, wild ones, tame ones. It’s also a show about us, and our emotions. Big ones, little ones, wild ones, tame ones.
From the joy of delivering a new lamb with your own hands, to the pain of losing your pet dog, and the confusion of discovering your favourite cow is in love with a tractor! ANIMALS explores how animals help us figure stuff out.
Performers Greg Sinclair and Hannah Venet use a variety of performance styles to bring children’s stories to life: live music, dance, lip-synching, and film alongside the recorded voices of the children telling their own animal tales.
Suitable for everyone 6 years old and older, their families and their friends.
Scottish Storytelling Centre, High Street, Saturday 19 May, 11am, £8 (£6; family £24), 0131-556 9579 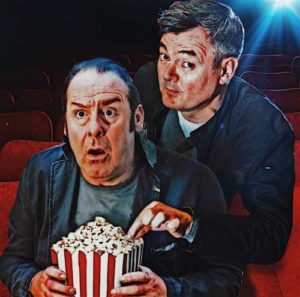 Double Feature
Edinburgh’s favourite comedy double act, Andy Gray & Grant Stott, are back in a brand-new play written by Only an Excuse’s Phil Differ. Double Feature sees their electrifying partnership in full force as they star as two old pals granted their dream job cleaning out their old cinema. In the process of stirring memories and recreating scenes from their favourite movies, their shared fanaticism for film soon makes way for bigger issues that have long-remained unresolved…
King’s Theatre, Leven Street, Friday 18 May – Saturday 19 May, 7.30pm, £17.50, 0131-529 6000

Forbidden Stories
Based on interviews conducted with members of the Greek and Turkish communities, the performance stages stories of mutual aid, solidarity and friendship which consolidate the links between the two communities of Cyprus. Blending storytelling with the use of new media, Forbidden Stories probes into prevalent notions of ‘otherness’ and challenges racial, religious and nationalist divisions.
Traverse Theatre, Cambridge Street, Thursday 17 May, 8pm, £6-£12, 0131 228 1404

The Homecoming
Old family tensions and resentments are stirred up as the all-male household reacts to meeting his mysterious new wife.
The Studio at the Edinburgh Festival Theatre, Nicholson Street, Wednesday 16 May to Saturday 19 May, £12, 0131-622 8086

Ma, Pa and the Little Mouths
A new work by award-winning actor and playwright Martin McCormick. The play is set in the beguiling world of Ma and Pa, who spend their time exchanging extraordinary and fantastic stories
Traverse Theatre, Cambridge Street, Wednesday 16 May – Saturday 19 May, 7.30pm, £9-£17, 0131 228 1404

Thriller Live
Direct from London’s West End, where it’s in its record breaking 9th year, Thriller Live is a spectacular concert created to celebrate the career of Michael Jackson.
Already seen by over 4 million people in over 30 countries, Thriller Live continues to moonwalk around the world, taking you on a visual, audio and electrifying journey through the magic of Michael’s 40 year musical history.
Experience over two hours of non-stop hits from pop to rock, soul to disco in a show that pays homage Jackson’s legendary live performances and innovative dance moves executed with flair, precision and passion in a show that you will never forget.
Edinburgh Playhouse, Greenside Place, Monday 14 May – Wednesday 16 May, 7.30pm, £29.75-£39.75, 0131-529 6000