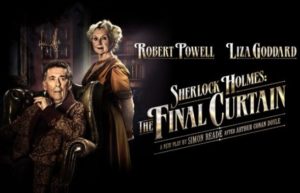 Sherlock Holmes: The Final Curtain
Could this be the final curtain for the world’s greatest detective?
Sherlock Holmes lives in retirement on the South Coast. He keeps bees, occasionally casts his fly fishing rod, even plays his Stradivarius when the rheumatism allows. All too aware that he’s older and slower, he’s concerned that he might have lost his touch, paranoid that he is an easy target for his enemies. There have been so many over the years. He never truly believed Moriarty – his arch nemesis – died at the Reichenbach Falls.
So when Mary Watson (wife of his former associate Dr John Watson) tracks him down, telling him she has seen her long-dead son, James, through the window of 221B Baker Street, apparently alive and well, Holmes is determined to solve the mystery and confront his own demons at the same time.
Chilling, gripping and filled with unforeseen twists and revelations, this new thriller reunites the dream team of Robert Powell and Liza Goddard following huge acclaim for their performances in Single Spies and Relatively Speaking.
King’s Theatre, Leven Street, Tuesday 29 May to Saturday 2 June, various times, £19-£32.50, 0131-529 6000

The Hour We Knew Nothing of Each Other
Some years ago, playwright Peter Handke was sitting in a town square watching people come and go. Suddenly men carrying a coffin emerged from a house and transformed the square into a stage, lending each vignette that followed – a woman walking her dog, a couple having an argument, a man jogging – special meaning.
Inspired by this experience, The Hour We Knew Nothing of Each Other is a play without words, narrated by music and animated by unspoken interaction. This production gives the simple pleasure of people-watching a vibrant dramatic life as the audience weave a narrative out of the everyday scenes of a city.
This 450-character production will be taking to The Lyceum stage directed by Lyceum Associate Artist Wils Wilson and Janice Parker. We are throwing open the doors of The Lyceum and welcoming a large scale cast of Edinburgh residents onto the stage to create this exciting production.
Royal Lyceum Theatre, Grindlay Street, Thursday 31 May to Saturday 2 June, 7.30pm, £15 (£13), 0131-248 4848

Wicked
Based on the acclaimed, best-selling novel by Gregory Maguire that ingeniously re-imagines the stories and characters created by L. Frank Baum in The Wonderful Wizard of Oz, Wicked tells the incredible untold story of an unlikely but profound friendship between two sorcery students. Their extraordinary adventures in Oz will ultimately see them fulfil their destinies as Glinda The Good and the Wicked Witch of the West.
The Edinburgh Playhouse, Greenside Place, Tuesday 8 May to Saturday 12 May, various times, £22.50-£92.50, 0844-871 3014

Sing in the City
The Aw Blacks are Sing in the City’s first choir, which started in 2010. Kirsty Baird is bringing them back to the Festival Theatre, along with the Hanley & the Baird band for their second visit after selling out in 2016.
You can be assured of a humorous set full of songs from all decades and genres and some original material written by the Musical Directors, Kirsty Baird & Annette Hanley.
The Aw Blacks are an energetic vocal group with 50 members, and with the band, provide a night of music you can dance and sing along to. Throw in some of Kirsty’s audience participation and humour, and you can look forward to a great night out.
Edinburgh Festival Theatre, Nicholson Street, Saturday 2 June, 7.30pm, £13–£19, 0131-529 6000