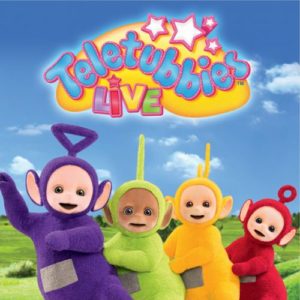 Teletubbies Live!
Join Tinky Winky, Dipsy, Laa-Laa and Po in a show full of love and laughter as they explore the magical world of Teletubbyland. Look out for the Tubby Phone, Noo-noo and Sun Baby in a fun, bright and safe world which captures young children’s imaginations and encourages them to explore the world around them.
King’s Theatre, Leven Street, Sat 7 April – Sun 8 April, 10am, 1pm, 4pm, £15–£22, 0131-529 6000 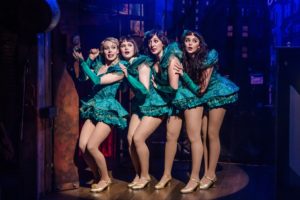 Crazy For You
High energy, high kicking and gloriously glamorous, the acclaimed Watermill Theatre production of Crazy for You is the ultimate feel-good musical starring Tom Chambers (Top Hat and Strictly Come Dancing), Claire Sweeney (Brookside, Clocking Off, Loose Women) and Charlotte Wakefield (Sound Of Music, Chitty Chitty Bang Bang) featuring a fabulous score from the Gershwin brothers’ songbook. Mistaken identities, heartbreak, happiness and a wealth of memorable tunes, including I Got Rhythm, They Can’t Take That Away From Me, Nice Work If You Can Get It and Embraceable You all feature in this exhilarating celebration of the great Broadway musicals.
Edinburgh Playhouse, Greenside Place, Tue 3 April – Sat 7 April, various times, £22.90–£73.40, 0844 871 3014

Rhinoceros
Eugène Ionesco’s classic 1959 play is an uproarious absurdist farce – and a chilling examination of conformism, nationalism, fascism and fundamentalism that has been compared with Orwell’s Animal Farm and Camus’s The Plague. It considers the countless ways in which humans are content to adapt themselves to new and horrifying circumstances, and give in to poisonous ideologies.
Royal Lyceum Theatre, Grindlay Street, Monday 2 April – Sat 7 April, various times, £16–£32 (£10; matinees £14–£28), 0131-248 4848

Locker Room Talk
Created in response to the Donald Trump’s infamous ‘grab them by the pussy’ comment, Locker Room Talk is a provocative exploration of how men speak about women in men-only spaces, asking if such sexually abusive rhetoric can really be accepted as mere ‘locker room talk’, or whether such attitudes are much more ingrained and drive abusive behaviour.
Traverse Theatre, Cambridge Street, Wed 4 April – Sat 7 April, £13.50, 0131-228 1404

A Play, A Pie and A Pint: McGonagall’s Chronicles
A biography of the late Dundonian poet Sir William Topaz McGonagall, written in ‘almost rhyming verse’ – the only way to honour the man who has come to be known as the world’s worst poet. Performed by Gary McNair, the play charts the poet’s life story and gets to the heart of the dilemma that surrounds his legend – is it okay to laugh at someone’s obvious and relentless failings?
Traverse Theatre, Cambridge Street, Tues 3 April – Sat 7 April, 1pm (6pm Fri 6), £13.50, 0131-228 1404

The Duke
Funny, poignant and playful, The Duke weaves together the tragi-comic fate of a family heirloom – a porcelain figure of The Duke of Wellington, the quandary of a scriptwriter stretching his integrity and an unfolding disaster as thousands of children flee their homes. Blending fantasy and reality, this playful show gently challenges our priorities in a world full of crisis.
Traverse Theatre, Cambridge Street, Tues 3 April – Thurs 5 April, 8pm, £10, 0131-228 1404