In Edinburgh theatre’s this week, Michael Ball rolls up at The Playhouse in Mack And Mabel, Balladynas And Romances is a splendidly structured, amusing, ironic and provocative tale about present-day Poland, and there’s just one more week to catch a raucous new take on Sarah Waters’ 1998 bestseller, Tipping The Velvet, at the Lyceum.

Based on the real-life romance between legendary filmmaker Mack Sennett and his rising star Mabel Normand, it tells the story of Hollywood’s golden age, where the fun of the silent screen was dominated by the hysterical chaos of the Keystone Kops and the glamour of the bathing beauties. A world where heroes wore capes, girls were tied to the railway tracks and it all ended with a pie in the face. 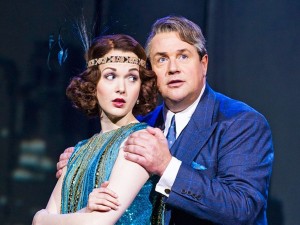 Mack & Mabel features an outstanding score by Jerry Herman (Hello, Dolly!, La Cage aux Folles) and is widely admired for its classic Broadway hits including I Won’t Send Roses, Time Heals Everything and Tap Your Troubles Away.

In a production by a multi award-winning team, with direction by Jonathan Church (Singin’ in the Rain) design by Robert Jones(The Wizard of Oz) and choreography by Stephen Mear (Mary Poppins), this Evening Standard award winning musical comedy is both a poignant love story and a joyous celebration of the excitement, glamour and sparkling humour of the era of silent movies.

Moulded from pop culture icons and ancient myths, from grand religious tales as well as TV series, gods descend upon Earth to bring meaning back into the lives of apathetic and lonely humans.

First an audience becomes acquainted with the earthborn characters – Olga, tired out with living and aging, a couple going through a marital crisis, and a lonesome man. Then the gods come down to Earth to start talking about their problems to an audience, like in group therapy. 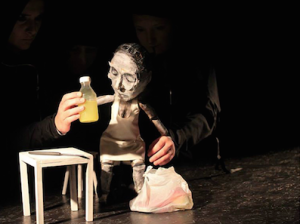 Nike is a ‘corp cold bitch,’ while Balladyna and Grabiec run a catering business cleverly together. Aphrodite is a mere beauty. Eros didn’t have it easy as a child of two gay men. Jesus would like to reestablish his religion all anew. All of them, following the motto ‘a god’s place is on Earth, because a god distant is a god needless,’ are to remind the humans of their existence …

A clash of the worlds of the deities and the earthlings triggers associations which form a basis for deliberations on the human condition and the interrelation between the tangible and the incomprehensible.

Besides the conventional acting and puppet techniques, there are projections used throughout the spectacle.

Balladynas and Romances is an adaptation of a novel of the same name by the controversial writer Ignacy Karpowicz.

Based on the true story of a crofter’s son who became a Knight of the Realm and Queen Victoria’s favourite general, this touching drama shines new light on the Scottish legend and fallen hero, Sir Hector MacDonald. 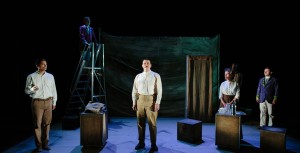 Rising from humble beginnings through the ranks of the British Army, he became a hero of the Battle of Omdurman. Following his appointment as Commander of Ceylon, allegations of scandalous liaisons surfaced. Was he guilty? Or was he the victim of a plot fabricated by an English Establishment to remove a Gaelic-speaking upstart who got above himself? 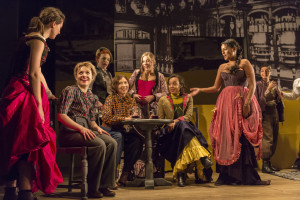 e audience at her local music hall: she doesn’t know it yet, but the next act on the bill will change her life. Tonight she will fall in love… with the thrill of the stage and with Kitty Butler; a girl who wears trousers. Giddy with desire and hungry for experience, Nancy follows Kitty to London where unimaginable adventures await.
Acclaimed playwright Laura Wade (Posh, Royal Court & West End) brings Sarah Waters’ audacious bestselling novel to The Lyceum’s beautiful Victorian stage in an electrifying new adaptation, directed by Olivier award winner Lyndsey Turner (Chimerica, Almeida & West End).Tipping the Velvet is a co-production between the Royal Lyceum Theatre Edinburgh and the Lyric Hammersmith.
Note: This production contain scenes of an adult nature.
Tipping The Velvet, Royal Lyceum, Grindlay Street, Edinburgh, until Saturday, 14 November, 7.30pm (Tuesday-Saturday), matinees (Wed and Sat, 2.30pm), £15-29.50 (evenings), £13-£25 (matinees), concessions from £10, 0131-248 4848

Stanley, Hazel, Warren and Rick make the weekly escape from their real life nightmares into a role-playing board game peopled by dragons and monsters. A safe world where the dangers are of their own imagining; where they are free to become heroes of their own devising. But how clear is the dividing line between what they choose to be and what they really are? What would it take for them to lose sight of it altogether?
Assembly Roxy, Roxburgh Place, Wednesday, 11 November, 7.30pm, £10, 0131-623 3030

A pilgrimage through the life of Robert Louis Stevenson, from his childhood in Edinburgh to maturity in America and the South Sea islands.

All words supplied by third parties