In what’s sure to be one of the highlights of this year’s Edinburgh International Book Festival, indie music icon Tim Burgess is set to appear in a special one-off event alongside Capital crime writer Ian Rankin.

In his memoir Telling Stories, the frontman of The Charlatans lifted the lid on life with the iconic band and their experiences at the heart of the 1990s ‘Madchester’ scene.

On Thursday, 18 August, Burgess will be joined by bestselling author and well-known rock junkie Rankin to discuss their shared passion for vinyl.

On the night, Burgess will share recommendations from a stellar cast of friends – including Iggy Pop and Paul Weller – that he has tracked down in record shops across the world.

The pair teamed up a few years back to record A Little Bit Of Powder – a track which combines a short story written by Rankin and music from Burgess – and the Inspector Rebus creator was The Charlatans’  special guest in Edinburgh last December when they played at the Usher Hall.

At the 2013 Edinburgh International Book Festival, Burgess joined Rankin on stage to talk about musical influences, his favourite albums, and the importance of a good haircut.

Much-loved Britpop survivors The Charlatans made some of the best music of the era – classics like Can’t Get Out Of Bed, Just When You’re Thinkin’ Things Over, One To Another, The Only One I Know, North Country Boy and Tellin’ Stories. Read a time-line of The Charlatans below.

Rankin, who will need no introduction in Edinburgh, is the most widely-read crime novelist in the UK, with worldwide sales of more than 30 million for his novels.

A few months back, Ian Rankin took part in AAA’s exclusive My Edinburgh series, in which he told us some of the things he loves most about his adopted hometown. 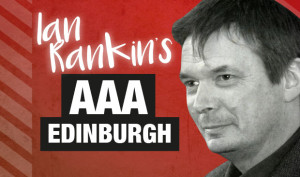 1990: Formed in the West Midlands by bassist Martin Blunt. Baz Ketley is the singer, but is replaced by Tim Burgess before the release of debut single Indian Rope. Debut album Some Friendly released.

1991: Guitarist John Baker leaves, and is replaced by Mark Collins.

1992: Second album Between 10th & 11th released. Keyboardist Rob Collins jailed after being an unwitting accomplice in an off-licence robbery.

1995: Self-titled fourth album The Charlatans released. It reaches No 1 in the album chart.

1996: Rob Collins dies in a road accident while driving back from Rockfield studios near Monmouth. The band decide to carry on and play triumphant show with Oasis at Knebworth.

1997: Fifth album Tellin’ Stories. It spawns band’s biggest hits, One To Another and North Country Boy.

1999: Sixth album Us & Us Only released, with the band now signed to Universal after their deal with Beggars Banquet expired.

2004: Eighth album Up At The Lake released. Reviews are mixed.

2007: Tenth album You Cross My Path released online as a free download. It’s a roaring success. 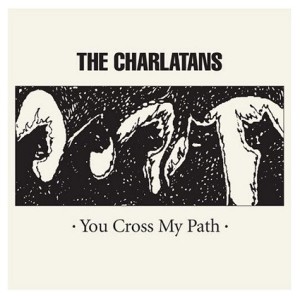 2008: Physical release of You Cross My Path.

2010: Eleventh studio album, Who We Touch, is released on Cooking Vinyl Records, and includes the single Love Is Ending. The album charts at No. 21 in the UK. 2010 also sees the twentieth anniversary of the band’s debut album Some Friendly, which they play live at Barcelona’s Primavera Sound festival.

2013: Drummer Jon Brookes dies after being diagnosed with a brain tumour in 2010.

2015: Modern Nature is released, giving the band their best reviews in years.