Inside Out, from the studio that brought us Toy Story and Up, is an animated adventure that takes us inside the depths Riley’s mind, an 11-year-old who’s forced to move cities with her parents. As a result, her emotions – Joy, Sadness, Anger, Fear and Disgust – are sent into chaos as they battle for control. Awash with mature themes but in a way that appeals to even the smallest of children, Inside Out is a beautiful, perceptive adventure in which lessons are learned and fun is had. The animation is – as ever when the powers at Pixar are concerned – sublime and the treats hidden along the way have the power to make your heart sing and howl in equal measures.

Song of the Sea:

Another animation, this time from a little closer to home. This gem of an Irish fairytale, which was nominated for an Academy Award no less, sings off the screen and into the soul. Less sleek than big studio efforts tend to be, Song of the Sea is rough around the edges but all the better for it. It has a lived-in feel, the hand-drawn animation seeping with magnetism and antiquity. The fact that it’s reminiscent of old-school Disney is no bad thing. But that said, it’s its own creation and Tomm Moore is an exquisite crafter, his attention-to-detail superb and character designs second to none. A film filled with soul, songs and a story that simply washes over you – it’s divine.

Paul, a teenager in 90s France, immerses himself in the emerging electronic scene, becoming a DJ and partying like there’s no tomorrow – all the while shirking off his increasing responsibilities as an adult. Eden is a coming-of-age film of sorts that booms at the beat of its own nostalgic, soul-stirring soundtrack. Like many his age, Paul is determined to see his dream through, and indifferent towards the drabness of normal life – perhaps to a fault as he slowly loses himself in the process. The performances are impressive, and Mia Hansen-Love – director of Goodbye First Love and Father of My Children – employs the music brilliantly to emphasise the characters’ continuously shifting emotions and outlooks.

The sequel to the surprise sleeper hit in which Channing Tatum and Co took off their clothes while performing routines to sexy songs takes the story in a different direction. But, while it might disappoint some, it works well. Bored by his tame lifestyle, Mike finds himself on the road with his troupe for one last strip before they call it quits forever. Meditative and slow-burning in its first half, Magic Mike XXL focuses more on the bromance between the boys as the one life they know winds down. But the goods are still there, and the second half erupts into a full-blown orgasm of female-focused entertainment after a leisurely seduction. It’s subversive in the way it celebrates female – and even gay – desire, totally uncaring if the men in the audience feel alienated.

The smallest of Marvel’s superheroes reaches the big screen after a lengthy production process in which former director Edgar Wright dropped out only for Peyton Reed to step up. The result is a modest affair for the studio who have built themselves a rich and supremely successful Cinematic Universe. Paul Rudd inhabits Scott Lang – an ex-con turned tiny, armoured superman – well and is backed by a game supporting cast, even if they’re not as well serviced by the script. The humour is the film’s best element, particularly once the third act gets underway and Reed lets loose with the size-shifting – a power that makes a toy train-set seem deadly to Ant-Man but hilariously stupid to everyone else. Not a hands-down winner in any sense, but a fun diversion.

What to buy on DVD this week: 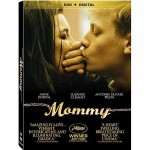 Xavier Dolan’s fifth feature in as many years, is a sprawling, yet gorgeously constructed and performed tragicomedy about a mother bringing up her wild teenager.
Share this article: