The organisers of TRNSMT Festival have announced that a series of official festival after-parties will be held in Glasgow next month.

King Tut’s Wah Wah Hut and the o2 ABC will play host to a number of live gigs and DJ sets to further shine the spotlight on some of the hottest up-and-coming acts in the country over the course of the festival weekend. The events will offer fans the chance to party late into the night after the festival, which is taking place over the course of three days but does not offer camping facilities. 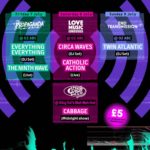 on Friday 7 July whilst Circa Waves and Catholic Action will perform at the venue on Saturday 8 July. Rock band Cabbage will also play an intimate live show at King Tut’s Wah Wah Hut at midnight on Saturday 8 July and popular Scottish rockers Twin Atlantic will close proceedings by playing a DJ set at the huge END Transmission party on Sunday 9 July. Entry to each of the events will be only £5 for TRNSMT ticketholders.

The first ever TRNSMT Festival will take place on Glasgow Green from Friday 7 until Sunday 9 July and will be headlined by Radiohead, Kasabian and Biffy Clyro. It will also feature performances from The 1975, Twin Atlantic, Belle and Sebastian, The Kooks, George Ezra, Catfish and the Bottlemen and many more. It is being held as an alternative to T in the Park, which is taking a ‘break’ this summer for the first time in 23 years due to pressure from authorities. Back in 2015, the annual music festival was forced to move from its regular Balado Airfield site to Strathallan Castle, leading to additional regulations being put in place.

Tickets for TRNSMT are on sale now and can be purchased via http://trnsmtfest.com/tickets

Lorde has just announced a massive world tour – and it includes