Sherilyn Fenn is to reprise her role as troubled femme fatale Audrey Horne in the new series of Twin Peaks, according to reports.

Deadline claims that Fenn will be the second cast member to sign up for the brand new season after Kyle MacLachlan, who returns as FBI Agent Dale Cooper, put pen to paper recently.

Twin Peaks doesn’t screen until 2017, but the return of the surreal show, which first aired in 1990, is one of the most hotly-anticipated TV events of the decade. 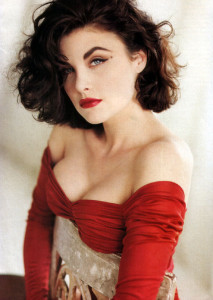 It is reported that Lara Flynn Boyle has decided against a return but that Miguel Ferrer will reprise his role as FBI Agent Albert Rosenfield, while David Patrick Kelly is said to be reviving his role as Jerry Horne.

Sheryl Lee, meanwhile, has been photographed on the set as Laura Palmer.

Jennifer Jason Leigh, Amanda Seyfried, Balthazar Getty and Robert Knepper are all rumoured to have been cast as new characters alongside original cast members.

Director David Lynch and his Twin Peaks co-creator Mark Frost have written one long script for the new series, which Lynch will film as one continuous movie before editing it down into individual episodes.

Although Showtime originally commissioned nine new episodes of Twin Peaks, the new season is expected to run much longer.

Back in April 2015, Lynch revealed that he had pulled out of the revival series – but the following month the oddball auteur announced that he was back on board to direct the new episodes.

The new Twin Peaks is set 25 years after the show ended, but continues the story.

Composer Angelo Badalamenti is also back on board – his original music for the show became iconic.

The teaser trailer, below, opens with the sound of howling wind and a voiceover by Michael Horse, who plays the role of Deputy Hawk.