It’s the news fans of The Walking Dead have been waiting on – and reason to be very exited about the return of the hit zombie show next month.

Andrew Lincoln, who plays leader of the survivor community Rick Grimes in the series, says fans can expect his character to come out fighting and put arch villain Negan in his place after the first half of season 7 saw the will of Grimes completely broken by his nemesis. 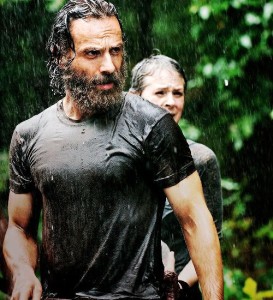 “It’s probably the opposite of what you just witnessed,” says Lincoln, pictured, of the tonal shift for the second half of the season. “Certainly from Rick’s point of view. You see a man in action again with some of the members of his closest family.”

Recently, Lincoln hinted at what’s to come in an interview with EW, saying, “There’s a lot more levity, if you can believe that, than you’ve ever seen before in Mr Grimes.

Lincoln says he loved filming the second half of season 7, especially now that his character is fighting back against Negan.

“There are several episodes that I loved being involved in and it certainly feels very much more like a show that I knew and recognised in the back eight,” he says. “I loved the episodes that I was in.”

And Lincoln is confident fans will be happy with what they see. “It’s The Magnificent Seven in the back half. Rather, the magnificent eight episodes. Wait till [episode] 16. I promise you, there is one beat in 16, I dropped my script and started punching the air and did a little jig.”