Oscar-winning Spanish auteur Pedro Almodóvar’s long-awaited melodrama, Julieta, opens in cinemas on 26 August – and the film has a new TV spot to share below.

Originally titled Silencio, the name was changed by Almodóvar to avoid confusion with Martin Scorsese’s Silence, as both films are due for release this year. 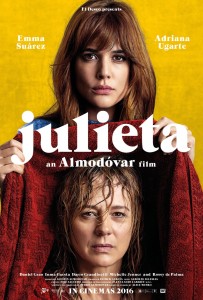 Explaining the decision to rename the film Julieta, Almodóvar said: “When we started pre-production, I heard Martin Scorsese was going to shoot a film with the same title but I didn’t think much about that coincidence at the time, mainly because I was thinking more in terms of the Spanish version of the name that the film would keep for all the markets (same as Volver).

“In Spanish it has quite a different ring to it.”

Julieta follows its eponymous character and her love and heartbreak over the course of thirty years, from 1985 to 2015.

Suarez and Ugarte play older and younger versions of the film’s protagonist, Julieta.

As the official synopsis puts it:

Julieta is a teacher of fifty five. She writes a long letter to her daughter, Antía, trying to explain all the things she has kept secret from her over the last 30 years.  When she has finished her confession, she doesn’t know where to post the letter. Her daughter abandoned her when she was eighteen and Julieta hasn’t heard from her in the past twelve years. She has searched everywhere, but now realizes that Antía has become a total stranger to her.

Julieta is about destiny, guilt complex and the unfathomable mystery that leads some people to abandon those they love, erasing them as if they meant nothing.  It is also about the pain that this brutal desertion provokes in the victim.

Julieta is Almodóvar’s first film since 2013’s I’m So Excited, and marks his 20th feature as a director.

Watch the new teaser trailer for Julietta below.