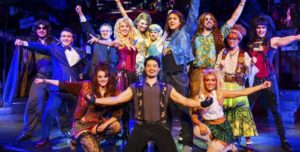 Rock Of Ages
It’s the tail end of the big, bad 1980s in Hollywood, and the party has been raging hard. Aqua Net, Lycra, lace and liquor flow freely at one of the Sunset Strips last legendary venues, a place where sex machine Stacee Jaxx takes the stage and scantily clad groupies line up to turn their fantasies into reality. Amidst the madness, aspiring rock star (and resident toilet cleaner) Drew longs to take the stage as the next big thing (and longs for small-town girl Sherri, fresh off the bus from Kansas with stars in her eyes). But the rock and roll fairy-tale is about to end when German developers sweep into town with plans to turn the fabled Strip into just another capitalist strip mall. Can Drew, Sherri and the gang save the strip–and themselves–before it’s too late? Only the music of hit bands Styx, Journey, Bon Jovi, Whitesnake and more hold the answer.
Church Hill Theatre, Morningside Road, Tuesday 31 October to Saturday 4 November, 7.30pm, £13, 0131-447 7597 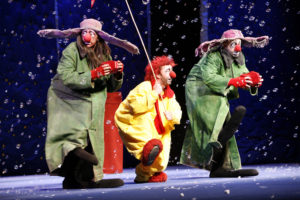 Slava’s Snowshow
Slava’s Snowshow has taken the world by storm, delighting and touching theatregoers in over 90 cities across the globe and transforming sensible adults into awe-struck children. It has been lavished with critical praise and awards including Olivier, Time Out & Drama Desk awards. A global phenomenon Slava’s Snowshow is unlike anything you have seen before – a show combining hilarity and poignancy with stunning spectacle and breathtaking images. This unmistakably unique comedy masterpiece now comes back to Scotland. The ensemble cast of clowns use water, cobwebs, bubbles and dry ice to dazzling effect; a world of wonder in which a bed becomes a boat, a web of cotton envelops the audience and one tiny piece of paper begins a blinding, heart-stopping snowstorm that engulfs an awestruck audience in a blizzard of sparkling snowflakes. Slava’s Snowshow touches the heart and the funny bone, packed with laughter and wonder for the whole family. Please note the show is not suitable for under 8s.
Edinburgh Festival Theatre, Nicholson Street, Wednesday 1 Nomember to Sunday 5 November, various times, £26–£31, 0131-529 6000 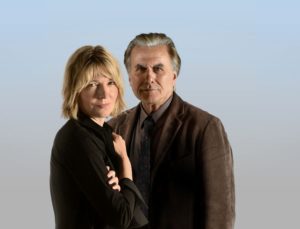 Duet For One
Originally produced at the Almeida and following an acclaimed run in London’s West End, Tom Kempinski’s multi award winning play Duet for One comes to Edinburgh. In this powerful and deeply moving play, Stephanie Abrahams (Belinda Lang, 2 Point 4 Children, Oklhahoma!), a brilliant concert violinist who seemingly has it all, is forced to re-evaluate her life when struck down by an unforeseen tragedy. Faced with a truth too difficult to comprehend, she consults psychiatrist Dr Feldmann (Oliver Cotton, The Borgias,Midsomer Murders, Sensitive Skin) and through a series of highly charged encounters is led to examine her deepest emotions and finally to consider a future without music. Two of British theatre’s finest actors rise to the challenge of portraying this duel between two razor sharp minds and the wry humour that underlines their relationship.Tom Kempinski’s dazzling play emerges as a gripping, poignantly funny and ultimately life- enhancing tribute to the human spirit.
King’s Theatre, Leven Street, Tuesday 31 October to Saturday 4 November, various times, £20.50–£30.50, 0131-529 6000

A Play, a Pie and a Pint: #71
In Partick there’s a quiet storm brewing. 71 year-old Chrissy invites her two oldest friends, Jean and Coco, to her house. The two OAPs rassle for Chrissy’s affection, slinging ancient mud at each other. Then comes the revelation which changes everything. Three women who’ve spent most of their lives together explore the global reality that most people are not exactly as they present themselves.
Traverse Theatre, Cambridge Street, Tuesday 31 October to Saturday 4 November, 1pm, £13.50, 0131 228 1404 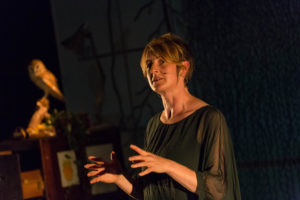 Wind Resistance
Having performed sell-out runs at Edinburgh International Festival 2016 and Celtic Connections 2017, Wind Resistance returns to The Lyceum for a limited run, this time on the main stage. Every autumn, two and a half thousand pink-footed geese fly from Greenland to winter at Fala Flow, a protected peatbog south-east of Edinburgh. From this windy plateau, writer and singer Karine Polwart surveys the surrounding landscape through history, song, birdlore and personal memoir. Ideas of sanctuary, maternity, goose skeins, Scottish football legend and medieval medicine all take flight, in this compelling combination of story and song.
Royal Lyceum Theatre, Grindlay Street, Fri 3 November to Saturday 4 November, various times, £25 (£10) , 0131 248 4848