Trainspotting
A coarse, intense and often hilarious rollercoaster ride through the darkest backstreets of the heroin scene of Thatcher-era Leith.
In a world where work and opportunities are scarce Renton, Sick Boy, Begbie and Spud rail against the trappings of a successful lifestyle held out of their reach, and seek life through the point of a needle. Published in 1993, Trainspotting defined a generation and remains one of the most important, hard-hitting stories of our time.
Before the globally successful film adaptation of Irvine Welsh’s Trainspotting, there was a theatre production at the Citizens that started it all. As the world waits for the film’s sequel, we’re bringing the notorious story back to the stage.
Directed by Main Stage Director in Residence Gareth Nicholls who has also directed productions of Into That Darkness and Blackbird during his residency.
King’s Theatre, Leven Street, Tue 14 Nov to Sat 18 Nov, various times, £20.50–£30.50, 0131-529 6000

La Clique Noël
The international hit La Clique returns to Edinburgh with a new show at the Festival Square Spiegeltent. The outrageous and unforgettable theatrical phenomenon La Clique brings its trademark inspirational mix of cabaret, new burlesque, circus and contemporary vaudeville in a new, sexy, dangerous show which is over your head, under your skin, and below the belt.
Born out of the Edinburgh Festival Fringe in 2004 in a genius moment by David Bates, owner and producer of The Famous Spiegeltent, La Clique has gone on to global acclaim and sell out audiences across the world. La Clique returns home to the scene of the crime – Edinburgh – for a very special seasonal treat; La Clique Noël.
With its dysfunctional collection of extraordinary new artists and don’t-miss favourites, the show features a scintillating live band and the best of the best in adult, genre-bending, New Variety from the subterranean world of circus, comedy, cabaret, variety, magic, burlesque and subversive performance clubs.
Previous much loved acts have included Boys in baths, twins in fish bowls, disappearing red hankies, Blue Rabbits, spinning Elvises and magic dragons. This special Christmas collection for Edinburgh will be no exception. La Clique Noël is compulsory Christmas fun and the perfect night out!
Festival Square, Lothian Road, Fri 17 Nov to Sat 18 Nov, 5pm, 6pm, 9pm, £20.50–£25.50 (previews £15.50)

Chrysalis
For its third year, the Chrysalis festival raises the curtain on the best young theatre-makers from around the UK with a three-day showcase of ambitious performances and radical works-in-progress.
Traverse Theatre, Cambridge Street, Fri 17 Nov to Sun 19 Nov, times & prices to be confirmed, 0131-228 1404

Cabaret
In the role that earned him an Olivier award nomination and WhatsOnStage award, Will Young reprises his critically acclaimed performance of Emcee in Rufus Norris’ production of Cabaret.
Ever since winning the inaugural series of Pop Idol in 2002, Will Young has been one of the UK’s most popular and successful music artists and holds the record for the fastest selling debut single in British chart history. Playing Sally Bowles will be musician, TV presenter and 2016 Strictly Come Dancing runner up Louise Redknapp.
Edinburgh Playhouse, Greenside Place, Tue 14 Nov to Sat 18 Nov, various times, £17.90–£74.90, 0844-871 3014 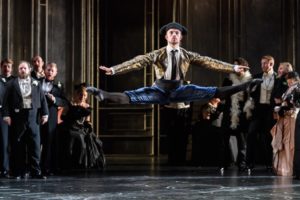 Scottish Opera: La Traviata
Passionate, flamboyant, gripping: Sir David McVicar’s La traviata has been in high demand worldwide since its Scottish Opera premiere in 2008. Set in the demi-monde of 1880s Paris, this stunning show is designed with sumptuous period style by Tanya McCallin. With his characteristic eye for detail, McVicar’s production gets to the core of Violetta and Alfredo’s doomed love affair – finding a heart-breakingly human story in the midst of a hedonistic world where both the rich and the wretched have their fun.
Verdi’s magnificent score sweeps the characters through their every shifting mood, from the wildly dramatic to the most tender of moments. Russian-Dutch soprano Gulnara Shafigullina, recently Violetta at the Mariinsky, and Anush Hovhannisyan, representing Armenia at Cardiff Singer of the World 2017, head a cast of international talent also including multi-award-winning Dutch tenor Peter Gijsbertsen and British baritone Stephen Gadd (Le Villi 2017).
Edinburgh Festival Theatre, Nicholson Street, Wed 15 Nov
and Sun 19 Nov, 7.15pm, £19.50, 0131-529 6000