It’s all about the bass in Edinburgh theatres this week. Fans of Michael Jackson can hear his peerless pop songbook at the Festival Theatre as Thriller Live – a show that’s been around for a decade now – returns to the Capital. At the Royal Lyceum, I Am Thomas is a wildly comic and provocative piece of music theatre, while The Producers, at the Church Hill Theatre, is Edinburgh Music Theatre’s take on the riotous musical comedy which took Broadway and the West End by storm. 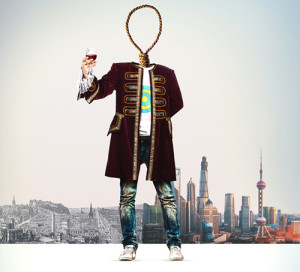 Edinburgh; a cold town on the edge of civilisation, in very much the Year of Our Lord, 1696. The church has spies everywhere. Here, you keep your counsel and choose your words with care … unless you are Thomas Aikenhead– a loud-mouthed, smart-arsed and likeable student at the university. A man in the wrong place at absolutely the wrong time … trouble is brewing for Thomas.

A rich vein of black humour is exploded in this account of the last person in Britain to be executed for blasphemy. Using Told by an Idiot’s internationally celebrated theatrical invention, we glimpse into Edinburgh’s dark past to reveal this true story with universal resonance.

A riotous and unsettling drama which swings between 1696 and the present day, I Am Thomas is performed with an original live score.

Endgame, like Beckett’s other works, is celebrated for its abstracted settings and characters, taken from reality yet still holding on to specific aspects of the mundane. The magic of the script is not in plot development so much as it is in the rise and fall of character relations.

What’s more, the very nature of its abstraction calls for varied interpretations of the script. Beckett captures the contradiction of linearity and repetition with an analogy to the final, entirely predictable stage in a game of chess.

His work situates the audience in a critical perspective towards his characters, rather than an empathetic one. Still, he allows for dark comedic retrospection as the ridiculousness of the situation is elongated through extended dialogue and playful irony.

Truly a thought provoking piece, past productions have commented on the possibility that some of Beckett’s own personality traits are displayed in the characters he creates, particularly that of Hamm.

He toys playfully with these monologues in such a way that could only have been done through self-reflection – an invitation for viewers to explore the deepest and most bizarre crevices of our own minds.

Set in a state-run sanatorium where the so-called “patients” are actually political dissidents undergoing various excruciating corrective treatments, The Hothouse shows the casual inhumanity and corruption that creeps into institutional authority and festers beneath anodyne bureaucracy. One patient, 6457, has recently died. Another, 6459, has given birth, after being raped by a staff member.

Roote, the man in charge, is apparently unaware of either situation, despite having signed the death certificate and met the pregnant woman days earlier. Meanwhile, inmates are restrained and electrocuted. Muffled screams seep through the walls; all this, Pinter details with a precise wit and hilarious comedy.

Fresh from sell-out Fringe concerts and an exhilarating four star production of Chess: The Musical, Edinburgh Music Theatre returns with this hilarious satire exposing the underbelly of the business side of Hollywood.

Based on Mel Brooks’ much loved Academy Award-winning movie, The Producers is a riotous musical comedy which took Broadway and the West End by storm, winning a record-breaking 12 Tony Awards and three Olivier Awards.

Left penniless and desperate following a string of flops, New York producer Max Bialystock recruits timid accountant Leo Bloom to help him pull off Broadway’s greatest scam. They aim to produce the worst show ever and run away with millions. Along the way they meet a beautiful Swedish woman, some amorous little old ladies, a flamboyant production team and a card carrying, pigeon fancying Nazi!

With outrageous, In-your-face humour and smash hit songs – including the gloriously offensive Springtime for Hitler – this colourful, camp and controversial celebration of bad taste is not to be missed.

Read our feature on Producers HERE

Thriller Live is a spectacular concert created to celebrate the career of the world’s greatest entertainer and undisputed King of Pop, Micael Jackson

Established in 2006, Thriller Live moonwalked into the West End after three acclaimed UK tours and standing ovations across Europe. Currently playing at the Lyric Theatre, as well as simultaneously touring the world, award-winning director Gary Lloyd’s show brings to life the sensational dancing and distinctive sound of Michael and the Jackson 5.

In a career spanning 40 years, Michael Jackson sold an unparalleled 750 million records worldwide with the Thriller album still the world’s best-selling recording of all time. His music continues to sell in its millions, winning new fans young and old alike.

Expect your favourite Jackson songs delivered by an exceptionally talented cast and live band, including the smash hits: I Want You Back, ABC, Can You Feel It, Billie Jean and Thriller.