This week, Strictly superstars Vincent Simone and Flavia Cacace shuffle into the Edinburgh Playhouse for The Last Tango, Blackadder comes forth again at the Church Hill Theatre, and I Am Thomas, a riotous and unsettling drama which swings between 1696 and the present day, enters its final week at the Lyceum Theatre. 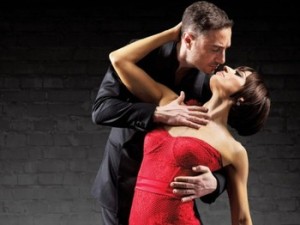 Fresh from their sell-out hit shows Midnight Tango and Dance ’Til Dawn, Strictly superstars Vincent Simone and Flavia Cacace have created their most moving production yet as the pair prepare to dance in their final ever show.

Twenty years of dancing together has seen them become Strictly Come Dancing favourites, UK Dance Champions and create and star in their own West End productions – but now it is finally time for the Nation’s best loved Argentine Tango Champions to say goodbye to the stage in a thrilling new live performance.

Don’t miss your last ever chance to see this beautiful couple do what they do best live – in an intimate, passionate and explosive experience – it’s time for The Last Tango.

A show that is as cunning as a fox who’s been made Professor of Cunning at Oxford University.

Edmund Blackadder joined the British army at a time when it was nothing more than an exclusive travel agency for gentlemen with an abnormally high sex drive. Winning the Military Medal at the Battle of Mboto Gorge for his selfless action in blowing up a heavily defended mango dump, Captain Blackadder was promoted and drafted to France.

Join Captain Blackadder on the Western Front in 1917, twenty yards from a lot of heavily armed people who want to kill him. Worse still, his brother officer is a man whose family brain cell is gathering dust in a pawn shop in Dunstable, General Melchett and his ever loyal side-kick, Darling, are quaffing champagne at HQ and Baldrick is in charge of cooking. 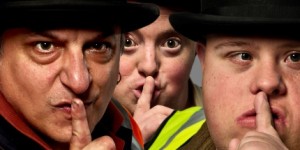 Ssssh! No, but seriously Sssssssh!

A sponsored silence is on; so whatever you do you have to keep it zipped, keep it buttoned, keep it together – even when one of the group is doing all she can to break you down.

And how can you, could anyone, stay silent when one of the team has just won wads of cash; and what about those builders who just keep popping in and out, surely something has to be said to them?

Renowned playwright Douglas Maxwell, composer MJ McCarthy and the Lung Ha Theatre Company performers take you on a (quiet) journey where silence is golden – but there are many ways to overcome silence when there is just so much to be said.

Lung Ha Theatre Company aims to be a leading theatre company for people with learning disabilities, in Scotland and beyond.

Edinburgh; a cold town on the edge of civilisation, in very much the Year of Our Lord, 1696. The church has spies everywhere. Here, you keep your counsel and choose your words with care … unless you are Thomas Aikenhead– a loud-mouthed, smart-arsed and likeable student at the university. A man in the wrong place at absolutely the wrong time … trouble is brewing for Thomas.

A rich vein of black humour is exploded in this account of the last person in Britain to be executed for blasphemy. Using Told by an Idiot’s internationally celebrated theatrical invention, we glimpse into Edinburgh’s dark past to reveal this true story with universal resonance.

A riotous and unsettling drama which swings between 1696 and the present day, I Am Thomas is performed with an original live score.

Neither God Nor Angel

Produced by A Play, A Pie and A Pint, Òran Mór. Presented by Traverse Theatre.

4 April, 1603. James VI, King of Scots, spends his final night in Holyrood before journeying south to claim the English crown, but after several bottles of wine he’s having second thoughts. He needs advice, political insight and reassurance. He gets William – a streetwise servant. When two nations want you, what’s a King to do?