He’s worth $100 million, is the richest DJ in the world, and has worked with all of the top names in pop. But just who is Calvin Harris?

Harris, it’s fair to say, has come a long way since the days when he was simply humble Adam Wiles, stacking shelves in a supermarket in his native Dumfries. Since bursting on to the music scene with Acceptable In The 80s in 2007, he has broken Michael Jackson’s record for most hits from one album, become the first British artist to have one billion plays on Spotify and turned hit-maker for stars like Kylie Minogue, Rihanna, Cheryl Cole and Dizzee Rascal. 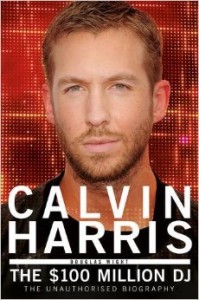 In 2014, Forbes listed Harris as the world’s highest paid DJ for the second year running and he has just scored his fifth number one hit – and his third this year. But what makes this Scot with the Midas touch tick? From where does he draw his inspiration and what makes him the globe’s most desirable DJ?

Calvin Harris: The $100 Million DJ is the first definitive biography of the chart-topping sensation, charting Harris’s astonishing journey from struggling musician to international superstar. Looking closely at the singer’s background and his remarkable rise to fame, it promises to reveal a side to the star never seen before.

AAA have teamed up with Black & White Publishing to give three lucky readers the chance to win a copy of this fascinating look at one of the biggest names in the music industry today.

The winners will be notified at 5pm on Tuesday, October 27. Usual AAA rules apply. Editor’s decision is final.

Calvin Harris: The $100 Million DJ, by Douglas Wight, published by Black & White Publishing, out now in paperback original, £9.99 from all good book stores.